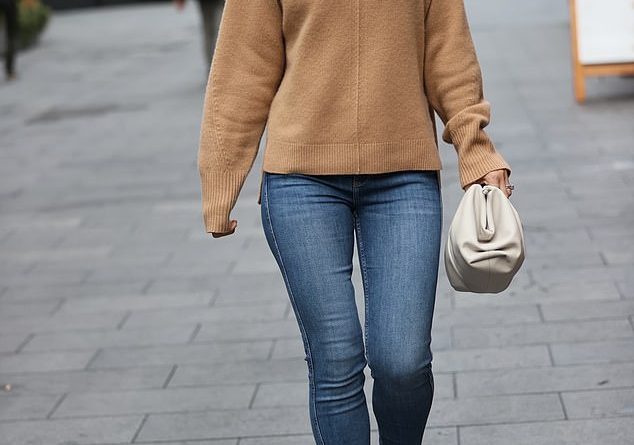 She’s been busy juggling work and life as a mum of two.

The model and TV star looked gorgeous in a brown sweater and skinny jeans as she headed to the Global studios.

Vogue, 34, wrapped up against the chilly weather in her cosy sweater in an on-trend nude shade.

She emphasised her long legs in her tight jeans and added a bold pop of colour with her bright orange heels.

The finishing touches were shades and a chic clutch bag in a cream shade.

Vogue returned to her radio show last month after giving birht to her second child, daughter Gigi in July with husband Spencer Matthews.

On Saturday the beauty shared a look at her dedicated gym routine, as she worked on regaining her impressive strength.

The Irish beauty, 34, showed off her incredible abs and toned legs in a black sports bra that featured flattering cut out detailing at the bottom.

She teamed her sporty top with matching leggings that had a white and yellow stripe down the side.

Vogue showed off her impressive strength as she shared the clip of her using various machines and weights during the intense session.

She wore her honey tresses in a practical high pony and kept her makeup natural for the workout.

Last month, Vogue was forced to hit back at trolls after she was body-shamed for her post-baby weight loss, which at the time was six weeks after giving birth to Gigi.

The broadcaster, who also has son Theodore, two, garnered much adulation when she shared a video of herself donning a skimpy blue bikini for a tan tutorial on Instagram.

The star revealed that she had been subjected to some ‘awful’ comments for her appearance.

Insisting that she ‘shouldn’t be made to feel bad’ for her own body, Vogue shared a video of herself working out in a red top with black leggings.

Captioning the silent clip of the fitness session, Vogue wrote: ‘There is no secret! I got a lot of comments and mails about the video I posted the other day. Mainly positive but my god there were some awful ones!

‘I hate the term ‘snapping back’ it’s not something I aspire to do after having a child nor do I think it’s important. My body is different to other people’s, I didn’t do anything specific.

‘I’ve only recently started training again, 4 times a week for 45 minutes a session. I try to eat healthily but I have not cut calories and eat a lot more than usual as I’m breastfeeding and it’s important to keep calories up so you have a good milk supply.

‘I trained the whole way throughout my pregnancy and I think that is a factor in the way I look now. I’m also VERY tall so there’s a lot more room for a baby.’

Revealing that she’s been a fitness devotee for almost half her life, she continued: ‘I’ve trained since I was 16, for me it’s a great thing not only for my body but for my mind too.

At the moment I feel permanently exhausted but training gives me energy and keeps my hormones under more control (they are still all over the place a little as with any new mother).’

Addressing the tanning video directly, she said: ‘I didn’t post that video to show off my body. I have always done tan tutorials, I don’t feel the need to hide my body because as I’ve read ‘it’s unrealistic 6 weeks PP’.’

‘What should a body look like after a baby?’ Vogue challenged. ‘There isn’t a set way it should look. I don’t want anyone to feel bad about their bodies and I certainly don’t want to be made feel bad about my own. ❤️.’

Statement: Insisting that she ‘shouldn’t be made to feel bad’ for her own body, the star shared a video of herself working out in a red top with black leggings as she shared her statement 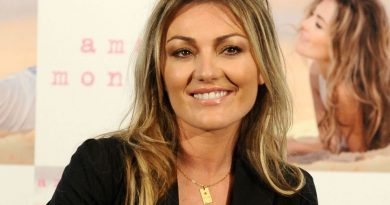 Victoria’s Secret Afterparty Goes Off with a Bang This Year