Home > Negotiations For A Financial Aid Package Continue After The Deadline Although there is still no agreement on the $ 1,200 check and other aid for the pandemic, Mnuchin and Pelosi agreed to continue negotiations tomorrow.

The Speaker of the House of Representatives, Nancy Pelosi, Democrat of California, and the Secretary of the Department of the Treasury, Steve Mnuchin, agreed to continue with the negotiations to approve an economic stimulus package for the pandemic before the presidential elections.

“The President and Secretary Mnuchin spoke this Tuesday at 3:00 pm for approximately 45 minutes. Their conversation provided more clarity and common ground as they move closer to an agreement, ”Drew Hammil, Pelosi’s deputy chief of staff, tweeted Monday afternoon.

The announcement comes on the deadline that Pelosi had set to reach an agreement on aid, which may or may not include a check for $ 1,200 for Americans, depending on the outcome of the negotiations.

Pelosi clarified this Monday that the deadline that she herself imposed two days ago did not mean that a concrete agreement would be reached today, but that the necessary terms would be established to continue negotiating.
“Not that this day was the day that we would reach an agreement,” Pelosi said during an interview on Bloomberg. “It was a day when we would have the terms on the table to be able to take the next step. I insist, the legislation takes a long time ”.

Talks between Pelosi and Mnuchin will continue tomorrow as committee chairs in Congress are charged with resolving differences over the level of funding and the language of the potential bill, Hammil added.

The approval of a new economic aid package has been shrouded in doubt  since the beginning of negotiations five months ago. On the one hand, because the talks between the Democrats and the White House have dragged on for weeks without reaching a definitive deal. And, on the other hand, because even if that agreement were to materialize, nothing ensures that the Republicans would approve it.

While in public Senate Majority Leader  Mitch McConnell , Republican of Kentucky, said Tuesday that any economic stimulus bill on which Pelosi and Mnuchin agreed would go to a vote before the plenary session of that legislative chamber. ,  privately sent a very different message .

“Okay, yes. If a bill approved by the presidency goes through the lower house, we will eventually present it to the plenary, that’s right, “McConnell told reporters on Capitol Hill on Tuesday.

However, three sources with knowledge of the matter consulted by the news agency  The Associated Press  assured that  the Republican leader told his party colleagues that he had recommended to the White House not to reach an agreement with Pelosi  that he considered inequitable, because it could divide the bench ahead of the November 3 elections.

McConnell would have made these statements during a private lunch with some of his coreligionists on Tuesday, according to sources at the agency who requested anonymity to speak freely.

The Republican leader in the Senate has been reluctant to support a comprehensive economic aid package  like the one proposed by the Democrats, which would cost the treasury some 2.2 billion dollars and would include, among other things, a check for 1,200 dollars for citizens and aid from $ 600 for the unemployed.

Instead,  McConnell is currently pushing for the approval of a ‘slim’ package of about $ 500 billion , less than a quarter of what Democrats are seeking. This bill would not include the direct aid check for citizens.

However, the president has spoken in favor of an aid package closer to that of the Democrats in terms of its total amount, namely  $ 1.8 trillion , which would include a new round of direct stimulus of $ 1,200, a an idea that the president has repeatedly supported.

Trump, who is seeking reelection and ranks below his Democratic opponent Joe Biden in the most recent polls, went on to say Tuesday that he would even favor a larger package than the Democrats.

“ I want to make it even bigger than the Democrats . Not all Republicans agree. But they will be, “said the president during an interview on Fox News this afternoon.

Meanwhile, McConnell has moved forward this week with voting on other Republican measures that have little chance of being passed by Democrats in the lower house. On Tuesday, the Senate will vote on another round of payroll subsidies for small and medium-sized businesses like restaurants and hotels, which have been particularly hard hit by the pandemic. 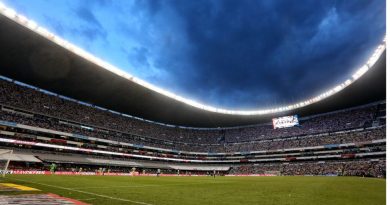 End Of An Era: The Azteca Stadium Would Change Its Name Due To A Crisis Caused By The Pandemic

Charlie Hebdó: 14 people sentenced for the 2015 attacks in Paris | The State

Blow to the CJNG, 15 of its hitmen fall amid a dispute with the Sinaloa Cartel | The State