But while everything’s going swimmingly personally, professionally he’s been frozen out of the Gunners side – with the latest snub being excluded from his side’s Premier League and Europa League squads for the coming season.

Ozil, 32, even took to Instagram to reveal his frustration at the situation – releasing a statement vowing to fight on from the disappointment.

And it’s understandable the German World Cup-winner will want to stay put where he is.

After all, he lives in a beautiful home in North London worth £10million with stunning wife Amine Gulse, where he keeps a fleet of incredible cars.

A short drive away is his favourite Turkish restaurant, Likya.

While Ozil puts his spare time to good use by doing his bit at a North London charity.

In 2016, Ozil bought a stunning six-bedroom detached house in an affluent area of North London – a short drive to Arsenal’s London Colney training ground and the Emirates Stadium..

The decor is heavily influenced by Ozil’s Turkish background.

In fact, all of the marble in the living room was shipped in from Turkey, while the home was designed by an interior designer friend.

His favourite room is just like stepping into a bazaar in Istanbul and is tastefully decorated.

Overlooking the living room is a bronze-framed painting of Ottoman Sultan, the ruler of Istanbul.

The entrance into his home cinema and games room features door handles that have his brand logo on.

In there, he loves to have a quick game of Fortnite, as well as cuddle up to Swedish/Turkish actress Amine and watch a movie.

And they’re often joined by Ozil’s pug, Balboa who will no doubt enjoy the lavish property’s garden.

Earning a salary of £350,000 allows Ozil to afford the world’s nicest motors. And his garage is one to be envied.

The playmaker is a lover of German manufacturer Mercedes-Benz and owns several of their cars.

His favourite ride is his G63 AMG that costs £143, 305, and is driven by fellow footballers Virgil Van Dijk and Raheem Sterling. 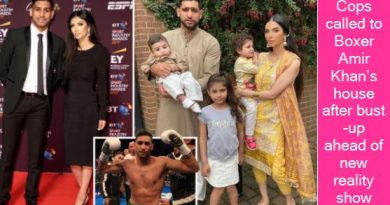 Barcelona clearly won the Champions League debut with a landslide

VIDEO: Cyclist collides with a motorcycle and goes from third place in the Tour of Flanders to the hospital