Home > Armenia and Azerbaijan: The Video of an “execution” that spurs the investigation of war crimes 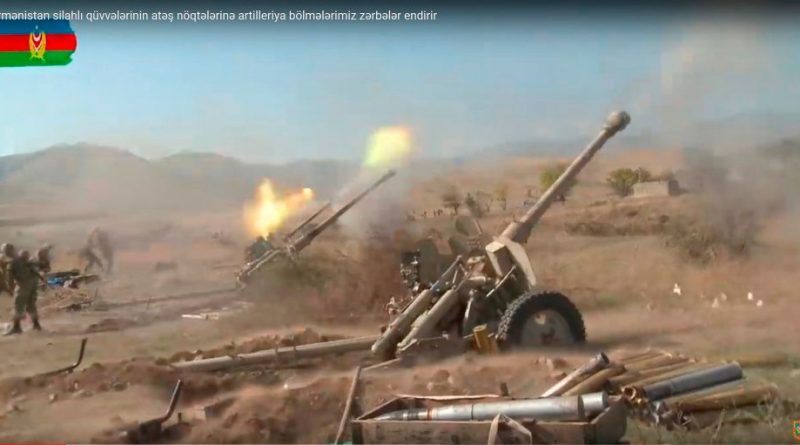 Videos of a possible war crime have emerged as fighting between Azerbaijani and ethnic Armenians spread around the disputed territory of Nagorno-Karabakh.

A video posted on a messaging app shows what appear to be two Armenians dressed in military uniforms being captured by Azerbaijani troops.

A second video apparently shows the same Armenians being shot, with their hands behind their back.

Armenian authorities have identified the men as Benik Hakobyan, 73, and Yuri Adamyan, 25. Azerbaijan has dismissed the videos as fal sos .

Europe’s leading human rights safeguarding body, the Council of Europe, has said it received the video and will investigate all alleged human rights abuses.

Clashes broke out on September 27 around the Caucasus enclave, internationally recognized as part of Azerbaijan but under Armenian control.

The clashes quickly escalated into a full-scale conflict, with indiscriminate shelling of towns and cities and the alleged use of banned cluster munitions.

Both sides announced a ceasefire on October 10 and again on October 18, but the attacks have continued.

Several thousand people were reportedly killed and the shelling killed civilians in both Armenia and Azerbaijan. Tens of thousands fled their homes.

Warning: some of the images in this story may hurt your sensibilities

What is true, what is false?

Fighters from both sides released images and videos showing prisoners of war and bodies of opposition soldiers.

The BBC analyzed several videos distributed by both enemy camps on social media, allegedly showing prisoners of war being wounded or killed. Only these two videos could be verified as what they intended to show.

A clip widely circulating on Telegram app channels, claiming to show an Azerbaijani prisoner of war shot dead by Armenian soldiers, is actually a video from Russia that first appeared on social media in 2013. Others are lacking sufficient details to be verified.

The pair of videos that the BBC verified were posted on an anonymous pro-Azerbaijani channel in Russian on Telegram last week.

What happens in the videos?

The first video appears to show Armenians Benik Hakobyan and Yuri Adamyan being taken as prisoners.

In the video, someone who speaks Russian with a strong Azerbaijani accent orders the men to walk forward, hand over their weapons, and raise their hands. He talks to the other soldiers in Azerbaijani and tells them not to beat the captives.

The youngest prisoner, Yuri Adamyan, removes a helmet and jacket before raising his hands and exiting the scene being filmed.

Although the older man, Benik Hakobyan, is wearing a military-style camouflage jacket, it is unclear if he is a soldier. They push him to the ground and he seems to groan in pain.

The first video was followed by a second showing the apparent execution of the two men.

The prisoners appear to have their hands tied behind their backs and are draped in the flags of Armenia and the unrecognized republic of Nagorno Karabakh.

They are sitting on a small wall and can be seen moving slightly. Then someone orders in Azerbaijani: “Aim for their heads.” Multiple shots are heard and the prisoners fall to the ground.

V i DEOS rejected as false

The BBC confirmed that the man giving orders in both videos is a native of Azerbaijan with a regional accent. The prisoners in the first video also appear to be the men executed in the second, as they wear the same clothing.

The Azerbaijani Defense Ministry quickly denied that it was its troops and called the videos a provocation . The clips were removed shortly after.

The next day, the Azerbaijani attorney general announced that an investigation had concluded that the videos were false.

But are they real ?

The BBC analyzed the videos and confirmed that they were filmed in Hadrut, a city that has witnessed heavy fighting. It is in the south of Nagorno Karabakh, near Fuzuli.

The videos were likely shot sometime between October 9-15.

Azerbaijan announced that Hadrut had been taken on October 9, although it was later learned that while they had occupied some strategic points around the city, on October 12 fierce fighting was still being fought for control of the city.

The first videos showing the Azerbaijani Army in the center of the city appeared on October 15. The videos of the prisoners of war first appeared on the 15th of that same month.

In the image above, there are four buildings that appear in the video that match identifiable structures in a satellite view of the region.

The video of the execution appears to be filmed in a park about a kilometer away in the south of the city.

By comparing an image from the video before the men were shot with a satellite photo of the city and images from a local television report, it is possible to identify that the exact location is the park next to Mkrtchyan Street (39 ° 30 ’53 .4 “N 47 ° 02’01.8” E).

Bellingcat identified the same locations and time periods for both videos and confirmed that the helmets and rifles seen on the soldiers matched those used at least in some cases by the Azerbaijani military.

Bellingcat wrote that his analysis “would appear to indicate that these two men were in fact Armenian fighters who were captured between October 9 and 15 by Azerbaijani soldiers, possibly special forces, and probably executed shortly thereafter.”

Azerbaijani online commentators questioned the authenticity of the video, pointing to the apparent lack of blood as a result of the shooting, but military experts interviewed by the BBC consider the video to be real.

“Hollywood misrepresents what gunshot wounds look like,” said Rob Lee, a military expert in the Department of War Studies at King’s College London.

The BBC spoke with a former British military intelligence officer who agreed to comment on the case on condition of anonymity for security reasons. “ These are real bullets, this is a real carnage . This is real, and I don’t see any reason to suppose it’s rigged. “

A brain mass could be seen emerging from a gunshot wound, he said.

What does Armenia say?

“In these videos, members of the Azerbaijani Army humiliate POWs and then brutally kill them with extreme cynicism,” he wrote on Facebook.

Tatoyan said Armenia’s representatives at the European Court of Human Rights had already asked for copies of the videos. Tatoyan said he would share the videos with the UN human rights commissioner, the Council of Europe and other international bodies.

A spokeswoman for the Council of Europe human rights commissioner, Dunja Mijatovic, confirmed that such material had been received and that the commissioner was “closely monitoring the situation and will examine all allegations of serious human rights violations and will take action when consider it appropriate ”.

A spokesperson for the International Committee of the Red Cross told the BBC that while the organization followed up on all these allegations, it did not speak publicly about specific incidents.

Nagorno-Karabakh ombudsman Artak Beglaryan assured the BBC that the men in the videos were two locals . He said that Benik Hakobyan was not a soldier but a civilian from Hadrut and that Yuri Adamyan was probably a soldier from a neighboring village.

What is a war crime?

The publication of these videos is part of a new front in a conflict that has lasted decades.

Nagorno Karabakh is populated mainly by ethnic Armenians, but is internationally recognized as part of Azerbaijan. Up to 30,000 people died between 1988 and 1994 in a war for control of the region.

The atrocities committed by both sides defined the attitudes of the Azerbaijani and Armenian populations towards each other.

Armenians remember the victims of the 1988 Sumgait pogrom when mobs of Azerbaijanis attacked and killed ethnic Armenians.

In turn, Azeris mourn those who fled the city of Jóyali in 1992 and were killed by Armenian forces.

The publication of such explicit videos has become as much a part of the conflict as the dispute itself.

“ Social media has been a key component of both parties’ campaigns. Winning international support and demonstrating military success to national populations has been very important, ”said military expert Rob Lee.

“So the soldiers can feel that their leadership encourages them to post body videos and maybe go further.”

“It becomes a slippery slope where leaders on both sides encourage or do not punish the posting of body videos. The next step could be when bodies are desecrated or prisoners of war are executed, ”Lee said.

The fighting in Nagorno-Karabakh in the 1990s ended with a ceasefire, but despite numerous attempts, a peace agreement was never reached.

Posting such provocative images is unlikely to aid any attempt to mediate between the Azerbaijani and Armenian-backed forces.

“It’s the worst that can happen,” said Laurence Broers, director of the Caucasus program at the London-based peacebuilding organization Conciliation Resources .

For Armenians in Karabakh, reports of incidents like this reinforce fears that if Armenian civilians meet the Azerbaijani Army or special forces, they are likely to be killed, Broers said.

It also points to another incident during the latest escalation of hostilities in April 2016, when four elderly Armenian civilians were apparently killed by the advance of Azerbaijani troops.

“On both sides, the reports confirm the worst atrocities cultural stereotypes of savagery and terror, and for Armenians in Nagorno – Karabakh today, generating fears of one ethnic cleansing . Reports of war crimes have a devastating and radicalizing impact, ”says Broers.

The curse of Chapo Guzmán, jail where he was last closed in Mexico The State